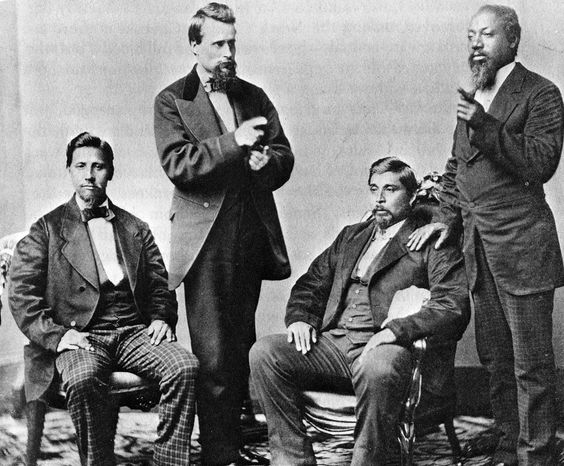 The conventional view of the settlement of America is that white Europeans immigrated to North America, stole the land, and killed most of the Native Americans. The few survivors were driven to reservations, where a relative few descendants live today.

This view is partially incorrect. Murder and mayhem did occur but what happened in many cases is that whites and Indians intermarried and interbred. The second and third generation American was often a hybrid North American, carrying genes from European, Native American, and African genes.  Continuing immigration of white settlers gradually increased the percentage of European contribution to the population. Our ancestors gradually forgot their origins and that they were part Indian.

The early settlers in the 1600's and 1700's were tough people immigrating to a difficult environment.  There were many young men coming to the new world to make their fortune. They often came without wives or their wives died in childbirth.  They did what was natural and what occurs whenever two population groups come together - they intermarried.  Who did these settlers marry if not Native American women? I have it on good scientific authority that women are required for the creation of descendants.

When two populations come into contact they usually interact, socialize, and intermarry to form a new population group.  This takes place in all countries. In North and South America there are a number of countries that proudly recognize their Native American roots. Mexico and Chile are two prominent examples. But Argentina and the US are examples of countries where large ongoing European immigration continued to dilute the original population mix.


Improved immunity from disease favored intermarriage. Children of Native Americans and immigrants would have better immunity to old and new world diseases.

Our history is full of conflicts and short wars between colonists and Native Americans. The wars get a lot of publicity and are a big part of our historical understanding of the past. But relatively few Native Americans and settlers killed in the Indian wars. For the most part they peacefully traded and interacted and intermarried.

There are numerous accounts of intermarriage. The marriage of Pocahontas to John Rolfe is perhaps the best known example. But there is little historic memory of intermarriage since it was not very noteworthy. People simply married and had children. Their children did the same and after a few generations little was remembered about the origins of the great and great great great grandparents.

Both my wife and I have family histories that indicate that one or more of our distant ancestors were Native American. And most of the known intermarriage would have occurred in the 1600 and 1700’s, when much of the European immigration were young men. And in the early years the population of the country was majority Native American.


Most of the social intercourse among Native Americans and colonists would have occurred at the edge of the colonial settlement.  And this line very slowly moved west, allowing for many years of opportunities for trade, sexual intercourse, and marriage. It took several hundred years to move the line of European settlement to move from the Atlantic coastline to the lands east of the Appalachian mountains

Disease also played a part. Europeans brought diseases which heavily impacted Native Americans who had no natural immunity to old world disease. And the Americas were the home of diseases for which Europeans had little native immunity. A person carrying both European and Native American genes had better immunity and a better chance of surviving and passing on his genes. The hardy survivors intermarried and passed on their immunities to their descendants.

Most people do not know their complete ethnic heritage back over 3 or 4 generations.  There are roughly 10 generations back to pre colonial America.  Ten generations equals 1024 forbears. Virtually no one knows the background or makeup of all of their 1024 ancestors.

I can only follow a dozen or so names back to the colonial era. Most of these were male lines who kept their last name. It is much more difficult to determine the ancestry of the women they married, who changed their name with each marriage.  And some of them were probably Native American - more then my one known Native American ancestor.

There are numerous anomolous DNA findings in pre Columbian Native Americans. Current science indicates that virtually all Native Americans are descended from women who crossed into North America from Siberia. The MTDNA Haplogroups are A, B, C, D, and X.

But more and more haplogroups from Asia and Europe are being identified.  It seems to me that the populating of the Americas is more complex.

5,000-year-old burial in China Lake, British Columbia (!). The two individuals were both mitochondrial haplogroup M, a type that is widely distributed and even dominant in parts of Asia today. "Mitochondrial Haplogroup M - See more at:
http://dnaconsultants.com/_blog/DNA_Consultants_Blog/tag/Jews_and_Muslims_in_British_Colonial_America/

My Other DNA Blogs